In spite of many efforts, the origin of this anchor-giant could not be enlightened until now. The anchor was discovered in November 2005 on the scrap place of the Jade-Entsorgung GmbH in Rostock’s overseas harbour. Its condition was miserable: The shovel tips were missing, it strongly had been rusted and it was strewn with many colour rests. Its weight amounted to 3.140 kg. Neither the place master nor the buyer were able to report something about the anchor’s history.

The anchor was transported from the scrap place with a special truck to the Stahlbau Vielist GmbH near Waren/Mueritz. The anchor was derusted, sandstreamed and furnished with a laminated protective coating. After that it was brought with another special truck and set up to the Strandresidenz-Kuehlungsborn. Marcus and Klaus Dieter Grosser from the art farrier ADEM-STUDIO in Satow supplemented the missing shovel tips so that the enormous anchor can be marvelled in full splendour now.

The anchor number is not clearly legible. Probably it reads “3000 kg – N366 – GOCT 76661 – 1975” in Cyrillic. The famous polar ship FRAM of Fridtjof Nansen had similar – however
much smaller cane anchors (www.fram.museum.no). The German four-mast barque “Passat” should have had a cane anchor with only 600 kg and a length of ca. 1.70 m.

The Strandresidenz-Kuehlungsborn (giebel@strandresidenz.info) kindly requests references to the origin of this cane anchor. 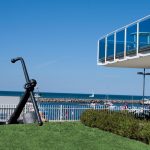 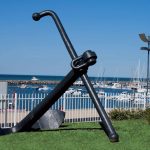 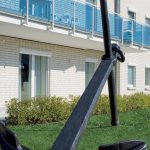 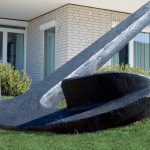