Garbs count as one of our most precious treasures of our culture. Two rare pieces are family-owned. 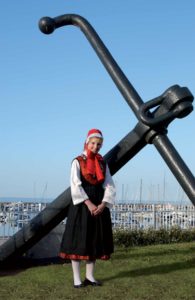 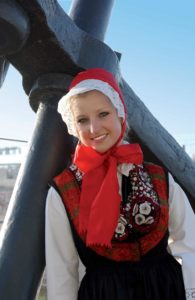 Our family owns two rare garbs from Rehna. One was worn by Paula (17) back in 2007 because of the G8 summit on the promenade in front of the Baltic Sea border-tower. These garbs have been worn since the 19th century in Mecklenburg-Vorpommern. It is possible that the garbs stem from Lübsee Area in north-west Mecklenburg-Vorpommern.

Our family owns the historic pieces for over 50 years now and only showed them to the public twice. The first time was in 1979 at the ‘Mecklenburg Heimattage’ in Ratzeburg. Most of the time they are being kept in a light-secluded area, safe from moths.

Most parts of the garbs are original. Most impressive are the valuable stitches on the breast piece: They were designed by the girls wearing them, themselves. All other material from the reworked pieces, such as the pie (skirt and girdle in one) or the hood are originals. They are also over 70 or 80 years old and as sensitive as the older pieces that are over 150 years old.

All pieces are made from wool, linen, silk or cotton (socks), therefore from natural fibres. These are extremely sensitive by now and need to be kept out of the light most times.

Wearing a garb has to be learntt

Heidemarie Frimodig from the museum of popular art in Schönberg/Mecklenburg and Rita Völzer from the “Plattdütschen Verein to Rehna” examined the pieces and helped Paula put them on. Putting on and wearing such sensitive and original garbs, is hard at first. Because the hood could not be worn anymore, Rita Völzer lent Paula her Rehnaer-hood (Stierhüll’) made of red silk since it was the G8 summit. The hoods are black.

The one worn by Paula in 2007 has been cleaned and put back safely in a poorly lit place, so that it can be enjoyed by later generations. We are currently checking the possibilities of putting the hoods on display in the the house.

Historians say that many old people describe the glamorous images that churches offered on Sundays and festive days. An eyewitness said that he was a lad back in 1877 with a choir of 112 farmer’s wifes and daughters. You would be able to see many ‘Stiermützen’ from Rehnaer until WW1. The last garb-wearing woman died in the 1930s.

The very old garbs are on display in museums or are family-owned. In local club’s, one may find reworked ‘Buerntüg’. At the “Plattdütschen Verein to Rehna” where our family-owned garb was reworked at, workers still sew, stitch and embroider by hand.